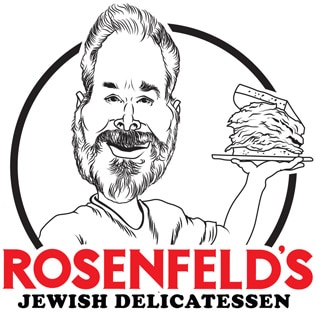 Rosenfeld’s Jewish Delicatessen was founded in 2013 by Warren Rosenfeld, a former Washington, DC lawyer, business owner, real estate developer and corporate CEO. Warren and his wife Dana had moved to Ocean City, MD in 2008 after they became “empty nesters.”

After living in nearby Ocean Pines for only a short period of time, it became apparent to Warren and Dana that there was no Jewish delicatessen in the nearby area. In fact, there was not any type of food that could qualify as real Jewish deli food anywhere within a two-hour drive. Tired of driving to the DC and Baltimore areas for real Jewish deli food every few months, Warren decided in 2012 to bring a traditional Jewish deli into the area. He was thereafter able to find a suitable location at the iconic Sunshine House structure in mid-town Ocean City, at the corner of 63rd Street and Coastal Highway. After signing the lease in December of that year, Warren targeted the deli for opening in mid-April of 2013. The deli opened to the public on April 29, 2013.

Warren recently expressed his views about his business relationship with DBS and how choosing the right company was important. The decision is based more on the quality of the overall relationship and not a simple touch screen ordering system.

“When opening the first of what is now a three location restaurant concept (with more locations being planned), our consultant informed us that the DBS model and company were the easiest to work with, and would benefit the new concept the greatest, at the lowest cost. I grew up in a restaurant family, in the 70's and 80's when there was no technology to speak of in the restaurant industry. I knew that the DBS technology was something that we had to have.”

“We researched one other company, which was much more expensive, and the technology they were offering looked more difficult for our staff to learn than what DBS had to offer. Once installed, the ease of operation, the data captured, and the behind the scenes reporting were as good as advertised. I spend a great deal of time looking at itemized sales data to gain insight as to what is best selling, and what is not. That can change from day to day, season to season, and DBS captures all of that data for me to analyze.”

“During our hours of operation, with all of our various menu options and variables, the DBS system has proven to be just right for us. Even with all of the various bread options, meat options, toppings, temperature options, and countless others, we run a smooth operation because the DBS on-boarding team worked with us in a careful fashion to create the technology that would account for any choices that a customer might make. Several “freestyle” features on our technology lets a server give even more detail to the kitchen, whether it be an odd customer choice, an allergy that the server wants the kitchen to be aware of, or a special request that we had never before anticipated. Additionally, the ease of being able to get our printer paper and ribbons from DBS directly adds to the simplicity of the process.”

“If we have an issue, a call to the Customer Success Team at DBS resolves the problem quickly, and their ability to get into our system remotely, in a matter of a seconds, lets us walk away from the problem, pay attention to our operations, and not think about the issue again. DBS gets to know the customers personally, and gain familiarity with our specific screens and needs, making the relationship in that regard the best that it can be. For all of these reasons, we highly recommend DBS, for new restaurants or established ones. They have treated us well, know our specific needs, and are always there to help us when we need them to do so.”

We’ll keep you up to date about new technology, events & innovative solutions! You could even qualify your business for FREE software & hardware! (No Junk. No Spam. We Promise!)
Email Sales 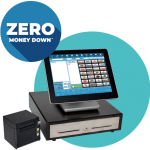 Get a POS Today with ZERO Money Down!*

We understand that deciding which POS system will fit your unique business can be a daunting task. Talk to our experts and find a solution that not only works for your business and helps you grow, but also fits your budget. We have flexible pricing options so whether you are looking for ZERO Money Down, a Low Monthly Payment, or a One-Time Purchase, we have options!

*Available for existing clients only. Subject to credit history. Pricing of services based on individual quote. See your DBS sales representative for full details. Other financing options available.